I was writing this post in English as I haven’t written in English for a while and was going to publish it anyway. However the whole of the Western Cape feels like home to me and I have been a “tour guide” on many hikes and excursions, showing friends places lessor seen (and allowing others to show me) and although not the intention it does overlap the Tour Guide theme of WordPress.

On the 27th January we had a family lunch to celebrate my wife’s birthday in the town of Franschhoek, Western Cape, South Africa. The town is grandiosely described on franschhoek.org.za in the following way:

” Nestled between towering mountains in the beautiful Cape winelands lies the magnificent Franschhoek Valley. This is the food and wine heartland of the country, where splendid wines are grown and our top chefs create international cuisine. Here breath-taking scenery, warm hospitality, world class cuisine and the finest wines all combine to create lasting memories.”

The website also claims that it is “the most beautiful wine valley in the world”. I am always reluctant to endorse the claims of those paid to lobby, but the reality is that Franschhoek is an amazing place with an atmosphere enhancing its beauty. But it was not because of Franschhoek I recalled a book I once studied and which happens to be one of the most acclaimed novels written in South Africa. This being the opening paragraph:

“There is a lovely road that runs from Ixopo into the hills. These hills are grass-covered and rolling, and they are lovely beyond any singing of it. The road climbs seven miles into them, to Carisbrooke; and from there, if there is no mist, you look down on one of the fairest valleys of Africa…

It describes a valley in Kwazulu-Natal, but I suppose if Franschhoek is “the most beautiful wine valley in the world” it must also qualify to be “one of the fairest valleys in Africa” 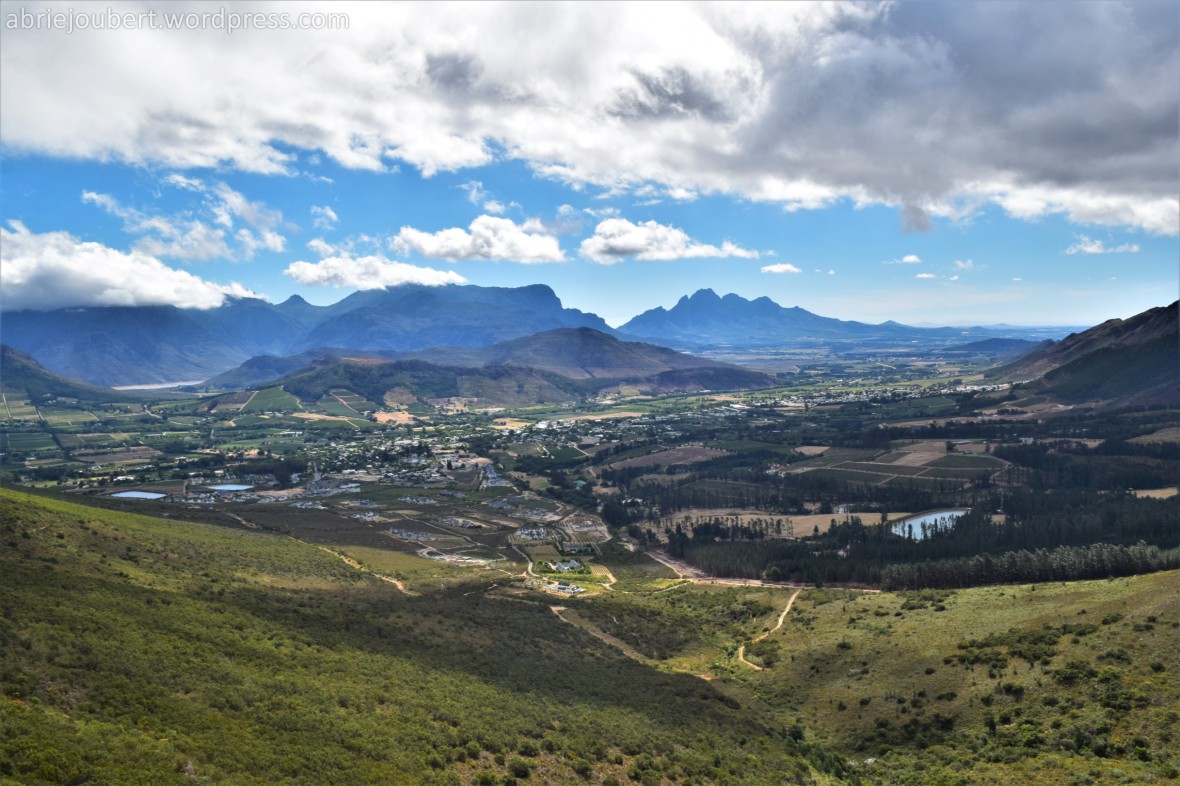 But the beauty of the valley, is not what made me of think of the book. Hiking is part of my DNA and Victoria Peak with its many views (see Atop Victoria Peak in South Africa) also peers down at the Theewaterskloof dam, the major reservoir for the city of Cape Town and surrounds. The presence of water always calms and yet energizes me. Especially hiking through or next to it or simply relaxing while reading a book in the presence of a close-by stream makes my soul aware of its positive influence.

My friend Danie on top of Victoria Peak with Theewaterskloof dam in the background. Photo taken 10 January 2013.

While the presence of water is inspiring, the absence of water, where water should be is totally disconcerting. If the dam is viewed at more or less the same angle (with the help of Google Maps) you see a desert in the heart of the wine country and the dam is now emptier than when these satellite images were taken: 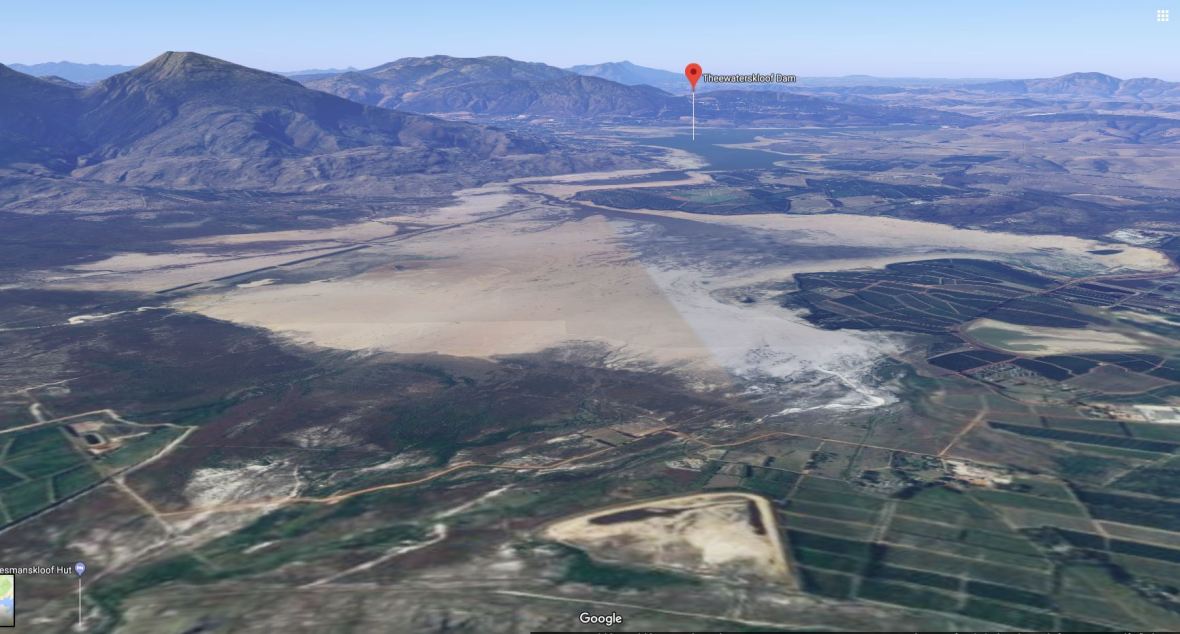 ⇓From Franschhoek we drove to the dam to feed my curiosity and to take photos. But when I walked on the dry surface knowing the water should be far above my head, I realized the potential implications. I was very close to tears. I looked at the little hill with the cross planted on it, saw the thick but rainless clouds and asked the Lord to make the clouds cry for my beloved country. 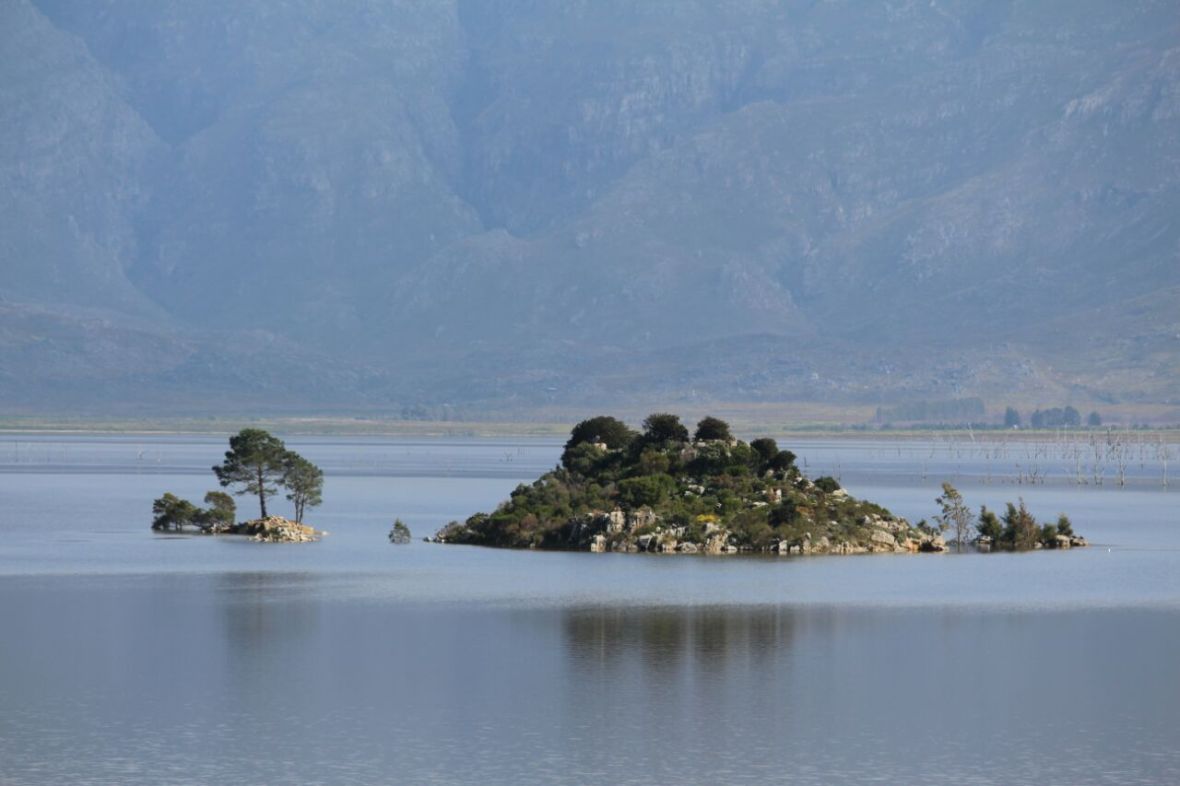 The water level on the 3rd of January 2014. The little white spot next to the arrow is the little island photographed above

Cry the beloved country is a novel by Alan Paton about social injustice in South Africa, written in 1948 even before the height of apartheid which came in the 1960s. One of the themes of the book is overuse of limited land.

“But the rich green hills break down. They fall to the valley below, and falling, change their nature. For they grow red and bare; they cannot hold the rain and mist, and the streams are dry in the kloofs. Too many cattle feed upon the grass, and too many fires have burned it. Stand shod upon it, for it is coarse and sharp, and the stones cut under the feet. It is not kept, or guarded, or cared for, it no longer keeps men, guards men, cares for men. The titihoya does not cry here any more.” 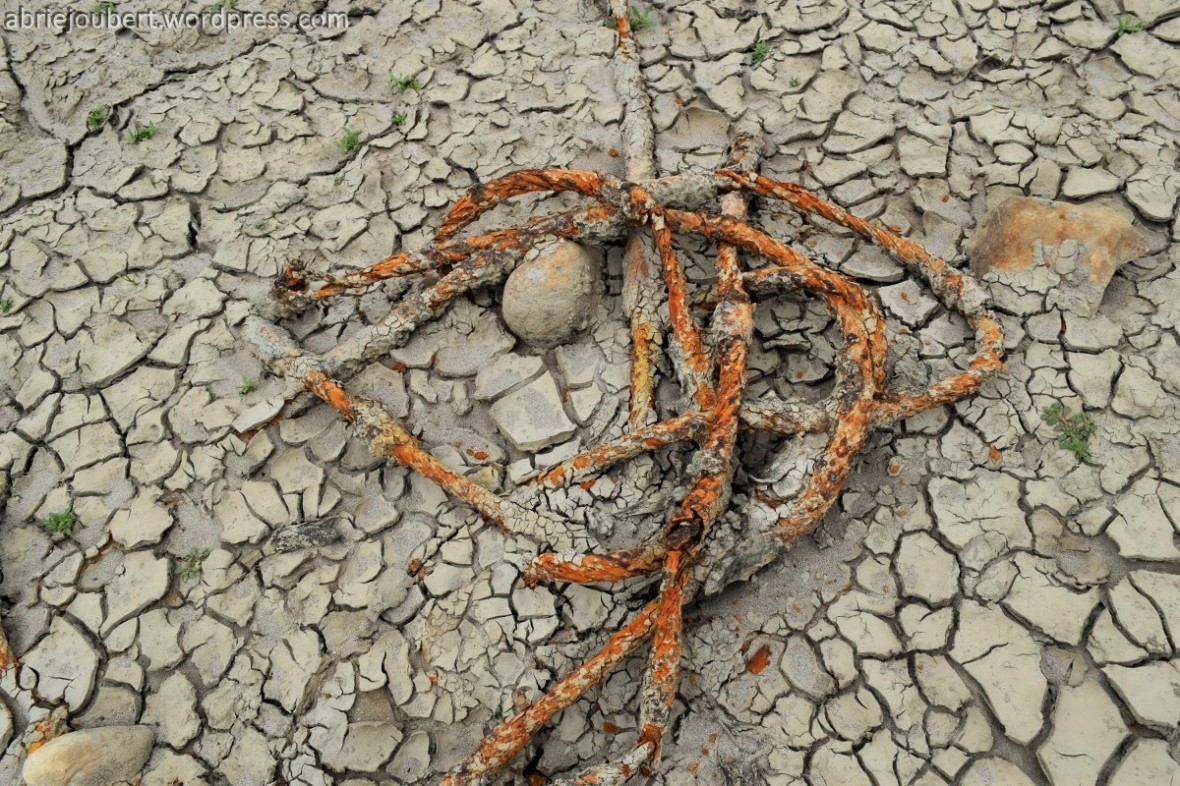 This metal cable wouldn’t have suspected that it would see the light again to expose its red bareness. And the weeds now sprouting wouldn’t have expected to grow at the bottom of a dam

A river runs through it. No this not a nostalgic remark regarding a movie made in Montana

Without water there is no life. We are in a severe drought; in the past few years rain has decreased drastically in the Western Cape. On 10 May (day zero) the taps in the greater Cape Town area will be turned off and everybody will have to queue for water. Last year significant rainfall (rain which can increase the water levels in dams) only came in late June.

The table above reflects the latest available weekly figures and compares it to previous years. I started chatting to a man at the dam and he said he doesn’t understand how the Steenbras dams can be so full and there must be enough water to avert day zero. People drive past the Upper-Steenbras dam, as it is next to a national road and get the impression there is a lot of water available. I reminded him that the capacity of the 2 Steenbras dams are just over 10% (13.5% after calculating it) of the capacity of the Theewaterskloof dam. In fact despite the Upper being 82% full and Lower over 44% those 2 combined currently have less water than Theewater despite it only being 12.5% full (40 000 million liters vs Theewater’s 60 000 million liters)

The man took a drive with his motorcycle and after a while came back. He told me he doesn’t want to become Biblical but it will have to rain 40 days and 40 nights to make an impact on the dam. Later a different man remarked that those who waste water should be forced to come and walk here. Yes the empty dam touches your heart. Unseasonal rain is predicted this weekend especially for Friday night.

I pray that I will awaken with similar words to these:

But at times like these by looking at the cross on what is supposed to be a little island, I am reminded of what happened at Golgotha. I believe God will be faithful but now is also time to ponder:

Who shall separate us from the love of Christ? Shall trouble or hardship or persecution or famine or nakedness or danger or sword? No, in all these things we are more than conquerors through him who loved us. For I am convinced that neither death nor life, neither angels nor demons, neither the present nor the future, nor any powers, neither height nor depth, nor anything else in all creation, will be able to separate us from the love of God that is in Christ Jesus our Lord. Romans 8:35, 36-39

37 thoughts on “Cry the beloved country”