Tina of the esteemed Lens-Artist quartet (how I missed typing that) reminds us that children in the USA are out of school and many families are in the midst of their hard-earned vacations, or at least a relaxing stay-cation. So let’s follow their lead and respond to this week’s challenge by showing how we and/or others “Take A Break”.

With English being my second language, I have suffered the odd indignation where my understanding, fluency or pronunciation has failed me. As a student I worked as a guide in the Cango Caves. I wanted to draw the attention of my first English speaking tour group to a formation behind them and blurted out: “And towards your backside”, which made me the butt of the conversation…

At the Lumbago Alley  I would describe the path and announce: please be very careful and do not bump your heads; this is a national monument – we do not want you to damage the cave! This was normally greeted with some laughter or at least smiles, but a tourist reprimanded me for my apparent unsympathetic stance by informing me coldly that I pronounce Lumbago incorrectly. She was 100% correct; I was pronouncing it in colloquial Abrie. My tour became an international lecture hall, but I had the last laugh – unlike my lecturer I was being paid. The tourists were on vacation and I in turn on a working stay-cation, it being the university break or vacation.

At primary school I regularly read the titles after a movie and observed that movies were made at a certain place while being on vacation. I wondered why it was always made on vacation? Later an older Abrie saw the va of vacation magically changing into lo and realized movies are shot on location and not on vacation. I still sometimes wonder how I managed that delusion.

So Tina I am therefore inspired by this challenge as momentarily I can be a naive child again.  All these photos were shot on vacation and never mind the location. Of course gazillions of tourist videos are also shot while people are on their breaks – PROOF that movies are made on vacation.

My youngest daughter Elrike, pictured above and I went on a father-daughter hike during the December 2018 holidays. She is looking upon the the magnificent Bergrivier (Mountain river) valley. At the end of this valley is the 3rd biggest dam feeding the Cape Peninsula. It has been overflowing for 3 weeks! The dams feeding the Cape Peninsula is now (5 August 2019) at 76.8% of their capacity. Last year at this time it was 56.8% while 2 years ago only 29.2%. We are certainly thankful. Last year I described my emotions in a post Cry the beloved country when I visited the biggest dam (Theewaterskloof) when it was only 13% full.

⇑I certainly spent a lot of time behind my camera on any vacation. Sometimes unsuspectingly the owner of the establishment you are photographing gives you a cold stare without you initially realizing it. Within the entrance hall of this mansion the equine owner was hiding from the rays of the setting sun, but I was being given the eye.⇑

⇓ Initially I did not see the horse but moved along to take a photo at a different angle. Only then I saw it! This is taken with a lens a few hundred meters from there.

I have placed photos before of what came to be known as Toweropstal roughly translated as “Magical Homestead” but not these as they were also taken during the December 2018 vacation (after I put my blog on ice).  Toweropstal became the focus of 2 books written by a community of Afrikaans bloggers about a fictional crime which took place here. Thus it has “spoken”(inspired me to write) in many ways. It has spoken to me again very directly – if not audible then certainly visual. To the left of the window dwarfed by the beautiful tree it told me to be back – back as a blogger. 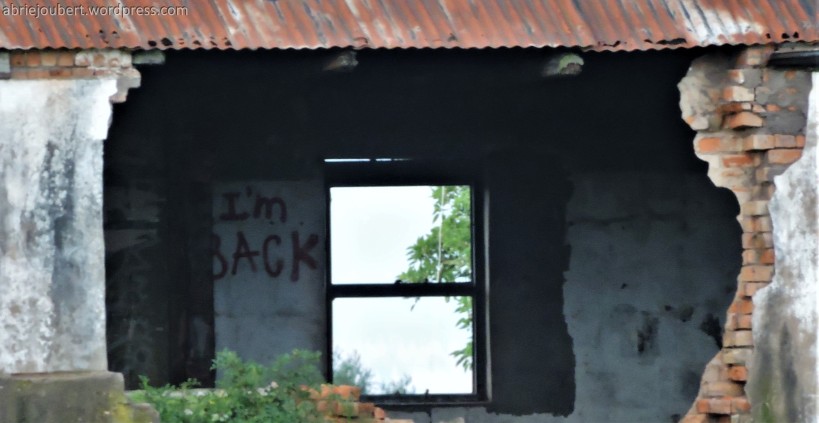 55 thoughts on “Taking a break or breaking the silence?”